On August 6, 2021, the Securities and Exchange Commission (the SEC) approved a proposal submitted by The Nasdaq Stock Market LLC (Nasdaq) regarding new listing rules that will require Nasdaq-listed companies to disclose information about the diversity of a company’s board of directors. As adopted, the new listing rules will require a Nasdaq-listed company to have, or explain why it does not have, at least two diverse directors (including at least one member who self-identifies as female and one member who self-identifies as either an underrepresented minority or LGBTQ+). The SEC also approved the implementation of a board recruiting service portal that will allow certain Nasdaq-listed companies to access a network of diverse candidates for a limited time.

The new listing rules will require Nasdaq-listed companies to publicly disclose consistent, transparent diversity statistics regarding the composition of their boards. In addition, the new listing rules will require companies to provide annually, either (i) in their annual meeting proxy statements or information statements (or, if the company does not file such statements, in its annual report on Form 10-K or 20-F) or (ii) on their websites,1 in a “board diversity matrix” (or a substantially similar format), statistical information regarding the company’s board of directors related to a director’s self-identified gender, race, and self-identification as LGBTQ+. Under the new listing rules, an underrepresented minority is “an individual who self-identifies in one or more of the following groups: Black or African American, Hispanic or Latinx, Asian, Native American or Alaska Native, Native Hawaiian or Pacific Islander, or Two or More Races or Ethnicities.” A link to Nasdaq’s model board diversity matrix can be found here.

Companies that are not in a position to meet the minimum diversity objectives within the required time frames will not be subject to delisting if they provide public disclosure explaining why they did not meet the applicable minimum diversity objectives. While Nasdaq will not assess the substance of the company’s explanation, it would verify that the company has provided an explanation that satisfies the new listing rules.

All Nasdaq-listed companies will be required to publicly disclose director self-identified board-level diversity statistics by the later of August 8, 2022, or the date the company files its next proxy statement for its annual meeting. Newly listing companies on Nasdaq2 must satisfy the disclosure requirements within one year of listing. If a company does not satisfy the new diversity objectives, it would be required to explain in its annual proxy statement, information statement, or annual report or on its website why it does not have at least two directors on its board who self-identify in the categories described above. 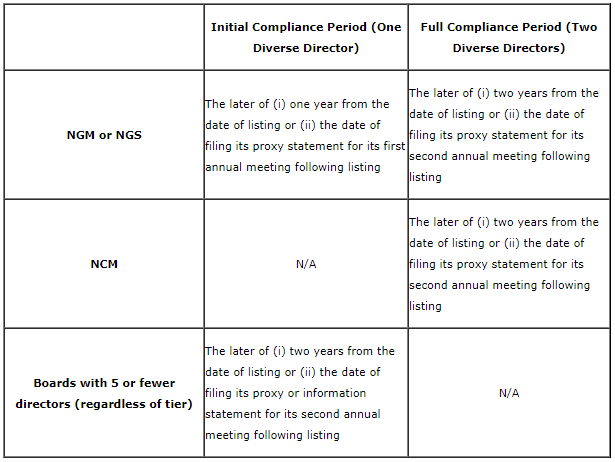 The new listing rules provide additional flexibility for smaller reporting companies (SRCs) and Foreign Issuers.3 SRCs can meet the diversity objective by having two female directors as an alternative to having one female director and one underrepresented minority or LGBTQ+ director. Similarly, Foreign Issuers can meet the diversity objective with two female directors or with one female director and one director who is an underrepresented individual (based on national, racial, ethnic, indigenous, cultural, religious, or linguistic identity in the country of the company’s principal executive offices), or LGBTQ+.

SPACs, asset-backed issuers and other passive issuers, cooperatives, limited partnerships, management investment companies, and issuers of certain specified securities are exempt from the board diversity objectives and disclosure requirements under the new listing rules.

If a company fails to meet the requirements under new Listing Rule 5605(f), it will have until the later of its next annual meeting or 180 days from the event causing the deficiency to achieve compliance. A company that ceases to maintain compliance with the applicable diversity objective due to a board vacancy will have until the later of (i) one year from the date of vacancy or (ii) the date it files its annual proxy statement in the calendar year following the year of the vacancy to have the requisite number of diverse directors or explain the failure to do so.

Companies are advised to prepare in advance for the new disclosure requirements and to consider what steps they can take now to address their obligations under the new listing rules. Companies should review their practices and policies relating to board composition and diversity, consider any changes they would like to make, and anticipate what they will be required to disclose under the new listing rules.

If you have any questions or would like further information about the new listing rules, please contact any member of the Lowenstein Sandler Capital Markets & Securities Practice.

1 If the company provides such disclosure on its website, it must add the disclosure to its website concurrently with the applicable filing and submit a URL link to the disclosure through the Nasdaq Listing Center within one business day after such posting. See Listing Rule 5605(f)(3).
2 For purposes of the new listing rules, “newly listing companies” are companies newly listing on Nasdaq that were not previously subject to a substantially similar requirement of another national securities exchange, including through an initial public offering, direct listing, transfer from the over-the-counter market or another exchange, in connection with a spin-off or carve-out from a company listed on Nasdaq or another exchange, or through a merger with an acquisition company listed under IM-5101-2. See Listing Rule 5606(d).
3 Listing Rule 5605(f)(1) defines a Foreign Issuer as (a) a Foreign Private Issuer (as defined in Listing Rule 5005(a)(19)) or (b) a company that (i) is considered a foreign issuer under Rule 3b-4(b) under the Securities Exchange Act of 1934, as amended and (ii) has its principal executive offices located outside the United States. This definition includes all Foreign Private Issuers and any foreign issuers that are not Foreign Private Issuers so long as their principal executive offices are also located outside the United States.